The cost-sharing proposal was discussed by the CCAQ (now known as the CEB) at its 56th session in March 1982, and had agreed to the idea of distributing among the organizations the replacement cost of the General Secretary of FICSA; it had also been considered that this arrangement might be extended to cover the replacement cost of the President. CCAQ(FB) had been requested to develop an appropriate cost-sharing formula and examine practical arrangements. This was raised again in 1985, 86, 87, 88, and in 1991 the CCAQ had no consensus on such arrangements. At its July 2004 meeting (CEB/2004/HLCM/25, para. 31) the HR Network considered a proposal for financial support to FICSA.

At the HLCM’s 29th session in March 2015, FICSA submitted a document with a proposed cost sharing formula to distribute the annual cost of the two FICSA officers (the President and General Secretary) across all organizations having staff associations/unions which are members of FICSA. A working group was then established, and is now chaired by WHO. After comprehensive consultation and discussion, a draft MOU is now available and is being reviewed by Legal.

How will this impact you and how to participate?

The President and General Secretary of FICSA are nominated from its full members and elected for a two-year term. The position requires a fully-funded full time release, which means the releasing organization will continue to fund the staff costs of the elected officers while they are released to FICSA.

With the cost-sharing or funding model in place, the staff cost of the two FICSA officers will be shared amongst organizations having staff associations/unions which are members of FICSA, based on their weighted number of staff calculated using FICSA dues methodology.

If your organization is interested to participate in the cost-sharing/funding model agreement, please reach out to the HLCM through the CEB secretariat and/or write to FICSA at ficsa@un.org

How will this benefit the releasing organization? 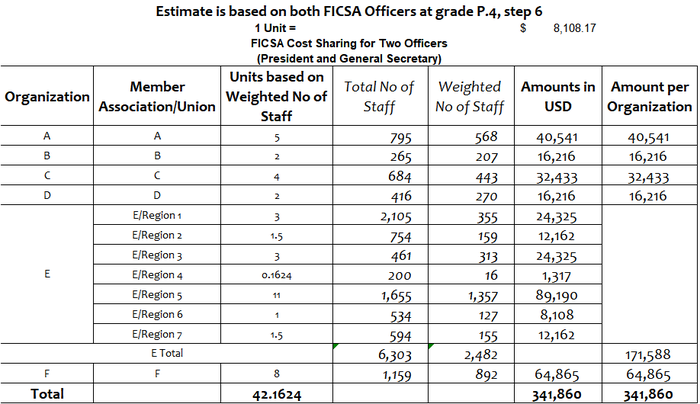 History of Staff-Management Relations in the UN Common System

History of the cost-sharing